Living For The City

"Living For The City" tells and complaint -as only he can do- the situation of racial discrimination, poverty, and hopes of life of many young blacks in those early 70's in the big cities. He is the great musician par excellence, a man committed to the others who have a mind devoid of bands and lenses that distort and deceive the reality of the world around us. Get the Grammy for best R&B song.

The song is partly inspired by the ending of a 10-year-old black boy by a white plainclothes policeman. A masterful reflection of more than seven minutes on the brutality of black America. At dawn on April 28, 1973, 10-year-old Clifford "Cleophus" Glover was walking with his 51-year-old stepfather through New York, suddenly a vehicle stopped in front of them and a white man insulted and began to shoot them. That person was a policeman who claimed that they resembled two known thieves who are 24 years old and 1 meter 82 centimeters. The policeman was charged with murder, and he defended himself by claiming that the boy had taken a weapon. Forensic evidence showed that the boy had been shot in the back, and there was no evidence of such a weapon. A jury of 11 white men and one black woman found him not guilty of murder and free. After that serious disturbances took place.

With infectious funk flair, authentic street noise sound effects, spoken dialogue, and the poignant jail door slam, Living For The City contains a cinematic intermission that tells the fictional story of a wide-eyed innocent who comes to the big city ready to make fortune. He is quickly tricked into becoming a drug dealer, arrested by the police and sentenced to ten years behind bars. There is not much hope in this story of the boy from "Hard Times, Mississippi": his big dream disappears and with it his future. Far from finding useful work and shelter in the city, he finds himself immersed in the heart of the heartless ghetto, with unscrupulous gangsters who control the city and the world of drugs.

As the story concludes we hear a jailer yelling: "Get in the cell, nigger!" brutally underlining the unfeeling institutionalised racism. There is no happy ending in this potted saga. As Stevie gruffly sings: "If we don’t change, the world will soon be over". "He wanted genuineness", says studio engineer Malcolm Cecil in Mark Ribowsky’s biography of Stevie Wonder, Signed, Sealed and Delivered, "so we had to get real cops, which only happened because [fellow engineer Robert Margouleff’s] father was the mayor of Great Neck and he got some cops to meet us in a parking lot. We told them, ‘Just say what you’d say if you were arresting a guy for drugs,’ and they did the rest - they came up with the ‘nigger’ line, which pleased Stevie immensely. If he’d said that in the guise of a cop, that would have been offensive instead of real as real can get."

A song full of inspiration and that unfortunately in the XXI century continues to be current year after year in the face of the inequalities that continue to occur around us today.
Album version 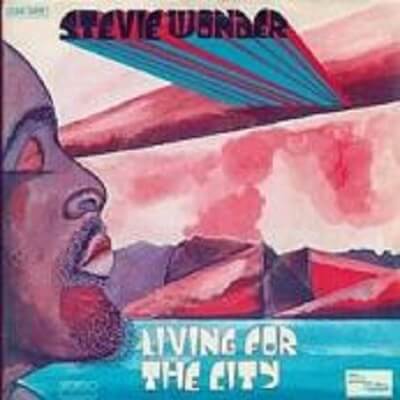 A boy is born in hard time mississippi
Surrounded by four walls that aint so pretty
His parents give him love and affection
To keep him strong moving in the right direction
Living just enough, just enough for the city...ee ha!

His father works some days for fourteen hours
And you can bet he barely makes a dollar
His mother goes to scrub the floors for many
And youd best believe she hardly gets a penny
Living just enough, just enough for the city... yeah!

His sisters black but she is shonuff pretty
Her skirt is short but lord her legs are sturdy
To walk to school shes got to get up early
Her clothes are old but never are they dirty
Living just enough, just enough for the city...um hum

Her brothers smart hes got more sense than many
His patiences long but soon he wont have any
To find a job is like a haystack needle
Cause where he lives they dont use colored people
Living just enough, just enough for the city...

Bus for New York City!
Hey, bus driver! I'm getting on that, hold it

Thanks a lot
Wow, New York, just like I pictured it
Skyscrapers and everything
Hey hey brother, hey come here slick
Hey you look, you look hip man
Hey you wanna make yourself five bucks man
You look hip
Run this across the street for me right quick
Okay, run this across the street for me
What? Huh? I didn't know! What?
Gimme your hands up you punk!
I'm just going across the street
Put that leg up, shut your mouth
Hell no, what did I do?
Okay, turn around, turn around
Put your hands behind your back, let's go, let's go

A jury of your peers having found you guilty, ten years
What?
Come on, come on, get in that cell nigga
God, lord

His hair is long, his feet are hard and gritty
He spends his life walking the streets of new york city
Hes almost dead from breathing in air pollution
He tried to vote but to him theres no solution
Living just enough, just enough for the city...
Yeah, yeah, yeah!

I hope you hear inside my voice of sorrow
And that it motivates you to make a better tomorrow
This place is cruel no where could be much colder
If we dont change the world will soon be over
Living just enough, stop giving just enough for the city!!!!